This photo is from Stephen Bentley and is mostly of the Electrical Branch. It was taken in the British Club in Abadan, just up the river North of the Persian Gulf in early November, 1955. Steve is on the extreme right at front and says that we had to be off the streets by 12 midnight otherwise you would be shot (curfew). Most of the British out there were Scots oil rig engineers.

Kuwait further South was only a sleepy city in those days. The Arabs built a freeway right out in the desert going nowhere just so they could drive their Cadilacs. 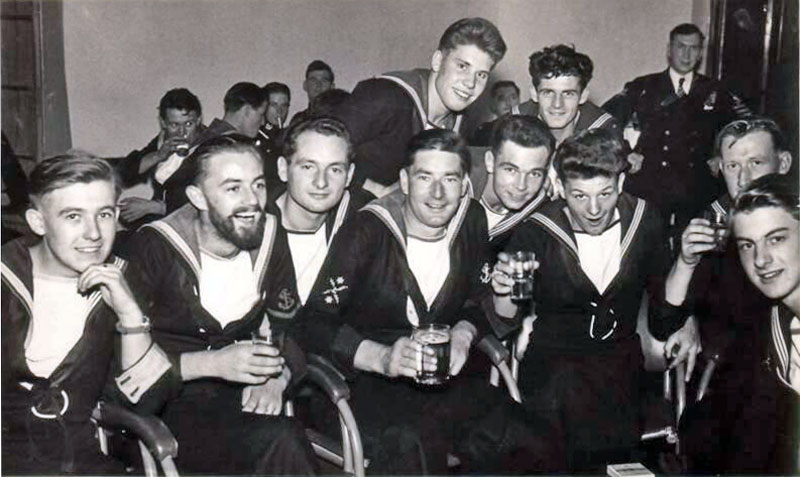 Steve joined the Gambia in November 1954, and said, "being in the electrical Branch, we had the overhaul & repair the DC Fan motors of which there were 140 on board. The cockroaches were in plenty - they got in your soup and hammocks. However in 1956, every Naval ship was fumigated, and we never saw any after that." 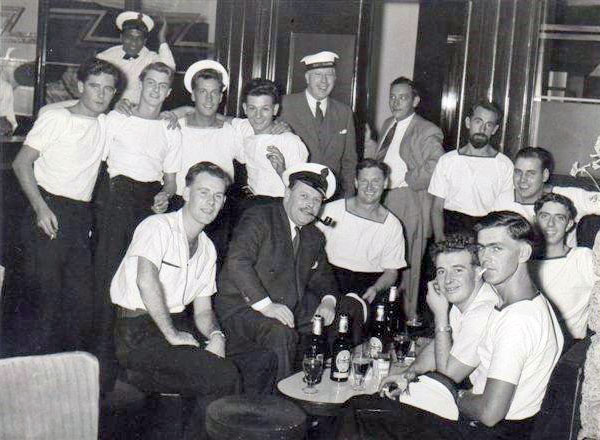 Grand Hotel in Calcutta, January 1956. Steve emailed me saying "I am standing second from left. The tall person at the rear is wearing my naval cap. To the right of him, is a civilian river pilot - who pilots the ships up & down the Hoogly river which is about 40+ miles from the sea. This pilot was Danish. The photo was taken on a Monday because the bar shut down at midnight, as Tuesday was a "dry" day (no booze) in Calcutta.

On the subject of bars closing. At the famous Mount Nelson Hotel in Cape Town (I have stayed there)......the bar closes at 2 pm. the reason being is that the Lady guests don't want their husbands drinking all afternoon, because the ladies like some attention themselves in the afternoons! The hotel's Afternoon Tea at 4pm is also famous - the 'spread on the table is fantastic and the decor is second to none, with a grand piano playing in the background."

I am indebted to Steve for providing copies of the following images after I failed to retrieve them from the Web Archive.

I was the switchboard watch keeper for a 3 months stint - there were four of us. Two of which did 24 hrs. 4hrs 'on' & 4hrs' off' then we had a day off whilst the other two took over the next day and so on. The switch board watch keeper had to receive calls for power to various equipment. plus to keep the voltage at the 220 volt DC, as this would vary depending on the electrical load. We had to record "findings" in the log every half hour.

One morning on my fore-noon watch around 1040hrs (probably some time on October), one generator's volts started to fall rapidly - I went to try and boost up the volts on the regulator - within seconds the other generator's volts dropped, and then a complete blackout. The ships telephone exchange was also in the switchboard room but in a sub-compartment, I then heard the phones ringing in excess. After about 5mins., my divisional electrical officer came down; the Lt. Commander K. Lobb. He looked at the switchboard log and found that there was no entry at 1030 hrs. - for once in all time, I had missed writing the details! Anyway, Commander Lobb had strong words for me but did not take it any further, which on some ships, I would be under punishment.

The reason why the power failed is that: At a certain time of the year, thousands of jelly fish come into the harbor to breed, and being so many, quite a few made their way into the sea-intake system which cools the condenser thereby affecting the steam generation which in this case was to the steam turbine-powered generators. The sea intake to the condensers had a screen of wire mesh, the mesh having about a 1" square hole pattern of the mesh. The suction to the sea pump is fairly strong so the jelly fish would be "parted" in their body to get through.

Notes: There are four generators on the ship - two are sufficient normally. The switchboard on a Navy cruiser is way down near the bottom central part of the ship plus another compartment similar situated is the wheelhouse i.e. the telegraphs and steering wheel. These are out of harms way when in battle situations.

I asked Stephen if the switchboard on HMS Gambia were anything like the ones on the HMCS Haida, a Tribal-class destroyer, website, he replied:

The ones on the Colony class cruisers are different in that the switchboard has its own compartment, which is not affected by mishaps in the machinery in the engine room through various reasons.

The Gambia's electrical system had a "ring-main" which is an armoured cable running around the ship in water tight compartments with the switch gear(s) with thick plating were also watertight with means to isolate in sections if damage had taken place, due to "action."

The switchboard had numerous small indicating lights (to show whether a breaker was energized or not) also the indicator lights were different colors. i.e. the navigation equipment was blue, gunnery was red and the galley was white; the last would be switched off if short on power in "action" The ring main can be split-up and isolated in four sections, so a damaged section then would not affect the rest of the system. The four generators would also be running in action. There was placed at 90 degrees, the generator panel, showing voltage, current load and "ground lamps"

The two ground lamps would light in a 'dim' fashion if there was a 'ground' (a wire touching the ship's metal plating, one light would burn bright, the other not be lit at all, also a partial ground would be dimmer. Every day the electrical artificer would check the grounds, maybe be two or three. and by switching on & off certain breakers would list these and would get repairs done in that part of the ship. I don't think that there was one day without some "ground" showing somewhere in the ship! All the electrical wiring in the ship was lead-covered which added a huge weight.

After the Royal Navy

After leaving the Royal Navy Stephen joined the merchant navy. In September 2018, he emailed me about a voyage he took in 1962 from Shanghai to Cuba.

The ships in those days was not allowed through the Panama Canal if it was carrying Chinese goods so we had to go round the long way to Cuba (Chinese goods to Castro!) which meant down through the China Sea and the Islands, then across the Indian Ocean (2,000+ miles), up the Red Sea (1,400 miles), across the Mediterranean (2,100 miles), across the Atlantic (2,300+ miles) to Cuba. That meant 40+ days at sea calling on the way to fuel in Aden and Ceuta (Spanish Morocco). I have been down the Suez Canal once but 'up' 3-times. I was Electrical Officer on the ship - lots of work and breakdowns - another nightmare. In Cuba for six weeks....nice warm weather at least. 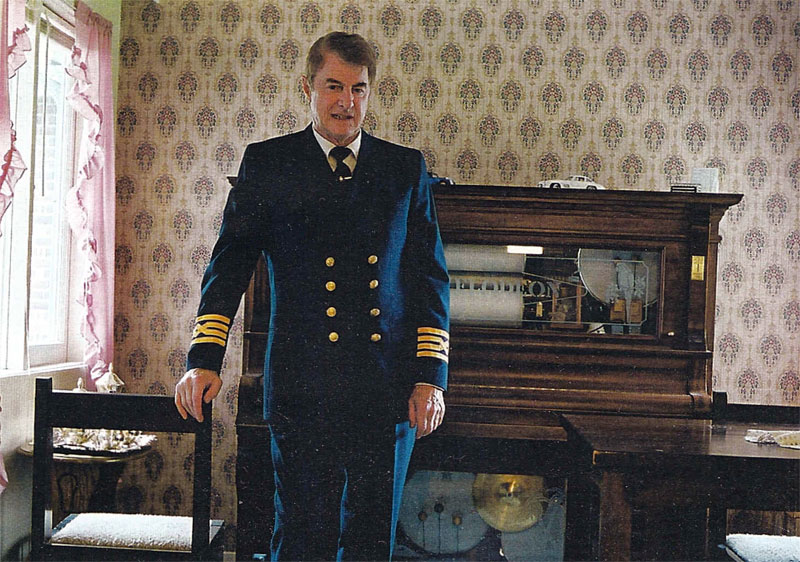 Merchant Navy Chief Engineer Stephen Bentley in 2007. Steve emailed that "The engineers wear a mauve color between the rings. In the background is my player piano. it used to be a single roll player with no other instruments. I installed the instruments and made the controls the play them.  I also make the ten tune rolls for these instruments on a perforator I made myself."