In January 2002 I had a request from Mr Ray Holden to put some pictures he had onto my website. I'm very proud to show these photographs of the Monday, 15th June 1953 Spithead Review of the Fleet. The Review consisted of 197 British warships under the command of Admiral Sir George Creasy, together with 13 commonwealth warships, 16 foreign warships and representative ships of the British Merchant Navy and Fishing Fleets. After the review of the ships some 300 FAA aircraft, led by Rear-Admiral Couchman, flew past. The ships were illuminated after nightfall and a firework display was given between 2300 and 2330 hrs. Ray wrote...

"I was in Tobruk when King George VI died which I believe was in 1952 and Queen Elizabeth came to power. I believe that her coronation was the following year and the Spithead review took place for her Coronation, I would say 1953. This year is the fiftieth anniversary of her ascension. You are welcome to the pics for two reasons, First I think that you will do justice to them and secondly because your father was a matelot. I don't know of another site who has these."

Some notes on Ray Holden's images:

In December 2003, John Carr sent me the following information about Patricia. Trinity House Vessel "Patricia". The ship in question was named as above and that was her correct prefix title - never HMS. Built in 1938 by Smith's Dock at Middleboro, 1116 tons gross the largest TH ship at that time. She was a lighthouse and buoy tender - because of the latter duties she was fitted with a diesel electric propulsion plant. This allowed her to do very precise maneuvering when working. Being the flagship of the fleet she had extra accommodation, fitted for visiting VIPs and for use at ceremonial occasions. She was at the D-Day landings (laying buoys) and scrapped in 1982 and replaced by a third ship of that name which is currently in service. She led the Royal Yacht etc. as they progressed through the lines of warships etc at the 53 Spithead Review. The Royal Yatch at the time was HMS Surprise.

Trinity House, Tower Hill, London EC3N 4DH is the HQ address, but most of their records were deposited at the Guildhall Library, Aldermanbury, London EC3N 4DH some years ago. PATRICIA does not seem to be listed in Lloyds register so I assume TH to be a separate body - i.e. her crew wouldn't have been Merchant Navy men.

I had an email from an ex F.A.A member in January 2004 who says that the ship identified as the Gota Lejon above is actually the Russian cruiser Sverdlov. Looking at photographs of the Gota Lejon and Sverdlov I'm fairly convinced the second ship in the picture really is the Gota Lejon. In 2009, I received an email from Bo Hermanson. He says that "She had beautifully raked funnels, whereas Sverdlov had straight. I sailed in Gota Lejon back in the early 1950's, and was very impressed by her good looks."

In August 2002, Mr. David Killelay very kindly sent me the following photographs. As with Ray Holden's images, I'm very proud to show these photographs of the 1953 Spithead Review of the Fleet.

In January 2021, Michael Headon emailed me. His father Frank Graham Headon served on HMS Gambia from March 12, 1953 to June 20, 1954. Michael very kindly sent this photo from his father's collection: 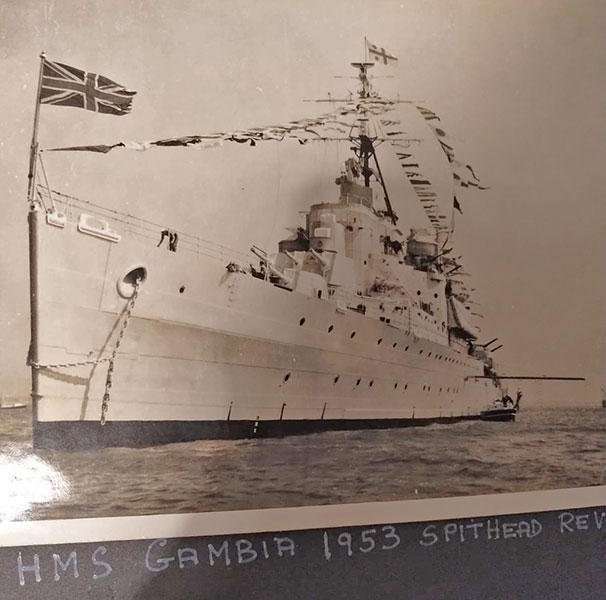 I do not know who submitted the following image, but it was on the original HMS Gambia Association website.

These are public domain and creative commons images of the review:

There are more images of the 1953 Spithead Review on the HMS Vanguard site. I've found some film of the Review on YouTube and created a playlist of them. 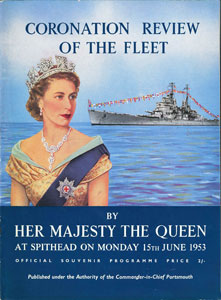 An interesting story about how this copy of the 1953 Coronation Review of the Fleet Program (PDF, 3Mb) came to be on this page. The copyright notice in the program says "The Contents of this Publication are Coypright and all rights are reserved. No extracts or reproductions from this Publication can be made in any form without the permission of the Commander-in-Chief, Portsmouth and the Publishers."

The post of Commander-in-Chief, Portsmouth was abolished in 2012, and the duties and responsibilites passed to the First Sea Lord. The publishers were Gale and Polden Ltd. of Portsmouth. They went out of business in 1981 after being bought by Robert Maxwell. Maxwell died in 1991 and his publishing empire collapsed in 1992, but just to be on the safe side I contacted the Admiralty about posting this PDF.

They replied saying "As the publication was originally written and published under the Authority of the Commander-in-Chief, Portsmouth we would consider this as being protected by Crown Copyright as it was produced by Admiralty personnel as part of their official duties. This publication would no longer be protected by Crown Copyright as this lasts for 50 years from the date the material was first published so you are free to use a PDF copy of this programme on your website.

The programme is a very interesting historical document containing a wealth of information about an impressive Admiralty Fleet and also through the advertising it contains."

So here, for the first time on any website that I know of is the 1953 Coronation Review of the Fleet Program (PDF, 3Mb)

There's a plan of the lined-up ships taken from the program also available (PDF, 1.1Mb)