Julian Best, and his brother Keith, served on HMS Gambia for the 1955 to 1956 commission. Keith and Julian did serve together on HMS Gambia but oddly, I can't find Keith Best in the list of crewmen in the 1995-56 Commission Book. I now know why this is; Keith's full name was John Keith Best but he was invariably known as Keith by people who knew him. Julian explained that "I think he was called Keith because our Father was John!!"

In July 1952, Boy Sailor Keith Best started the application process to serve with his brother Julian who was on HMS Devonshire at the time:

Julian served on several other ships during his time in the Royal Navy. His first was Devonshire, the officer cadet training cruiser, then Triumph, the carrier, that took over those duties from Devonshire, Enard Bay, Mounts Bay, Alaunia, Orion, Barrage, (coal burner, boom defence), that Julian wrote was "hard work!!" and "that's when I discovered why they called us stokers!!," Howe, Barbastell (another coal burner!!) Gambia with his brother, Keith on the same commission. Then a "horrible" draft to the WRNS camp St Budeaux, just across the water from HMS Drake, "nine months tending the boilers! Someone in Drake must have thought that I was on to a cushy number, so they bunged me on a plane and sent out to the Med to join Girdleness, the rockets they sent up from that ship put all our Guy Fawkes celebrations to shame!!"

Julian spent most of that commission on the water evaporators, and as the FWT (Fresh Water Tankie). He says that" I was the one who turned the water off to the Somalie showers when they went down for a wash!!!"

Julian explains how he and his brother Keith met on HMS Gambia.

"Well, the day we departed from Guzz, I was off watch, and sitting down on the mess, 24 mess, when I heard this clatter clatter of feet on the ladder behind me, I looked round and lo and behold there stood Keith. He said, "Alright Brawd?" (Brawd is welsh for Brother) and I said "What the f*** are you doing here?" "Well, I done the usual request to join Gambia, as you were on her, and, it was granted, so here I am, twenty minutes before we sail. You told me you was going on a trip to the Indian Ocean, so I thought 'not without me', so I put a request in, and only just made it, they was just about to take the gangway away, it's nearly tot time so I'll go and make sure they got me victualled in."

As it happened, he had made a request to join the cadet training County-class cruiser HMS Devonshire, a few years previous to that, but it wasn't granted as he was slated for HMS Chivalrous, a C-class destroyer, that was in Malta. 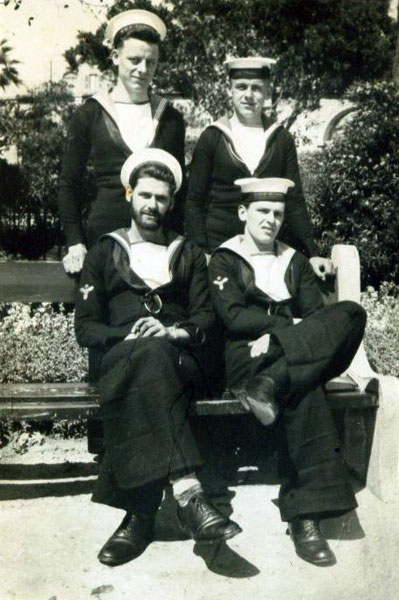 I don't think the man pictured is the last named or there would have been an "L" under the propeller insignia on his arm. Julian informs me that I am mistaken is saying this, he never saw one of the "L"'s - he should know, he was there, I was not.

Julian Best and the late Keith Best with others, so who are the other two? Julian can't remember them. 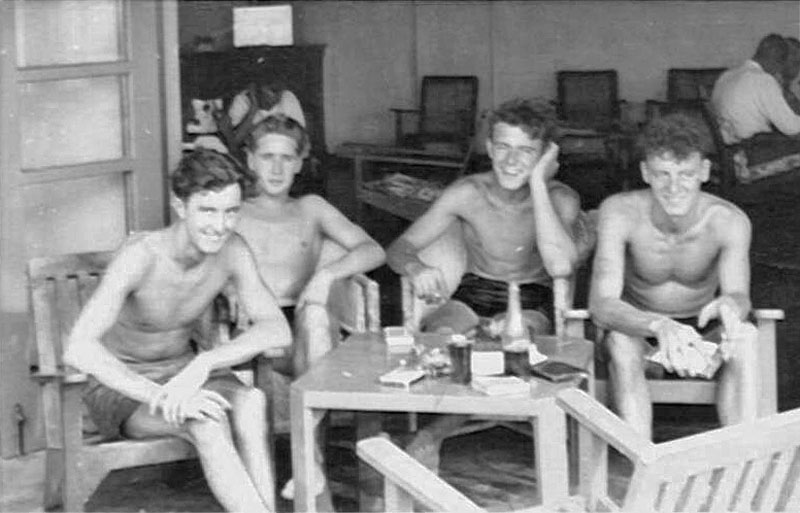 This is a much later photograph of Julian and Keith Best. This was taken in April 1962 at Julian's wedding and was used on Bill's original site by permission of Sheila Best, Keith's widow. 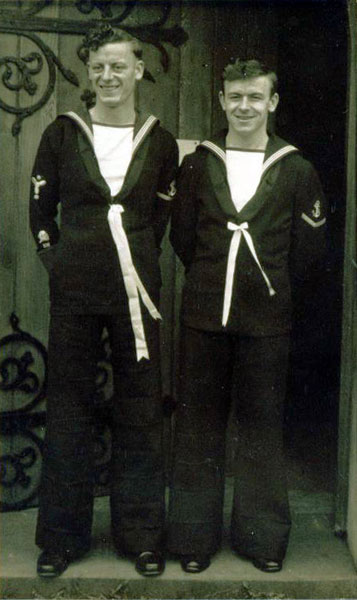 HMS Gambia returned to Devonport Dockyard on March 1, 1956. Before ships arrived home, invitations were sent to parents and next of kin to greet the crew. This invite was to Mrs Rees, mother of Julian Best. Julian also sent Bill the newspaper clipping. 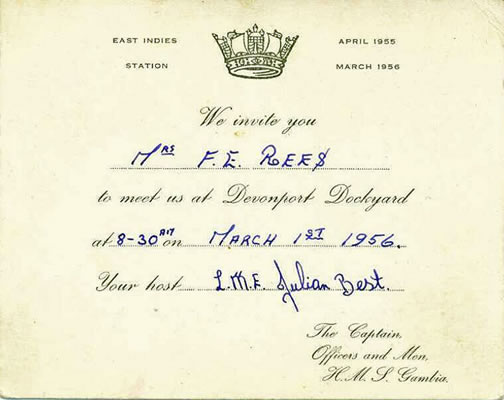 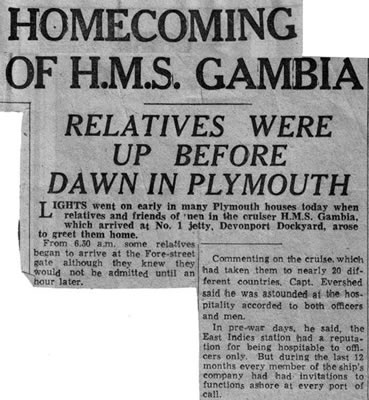 The text from this newspaper clipping reads:

RELATIVES WERE UP BEFORE DAWN IN PLYMOUTH

Lights went on early in many Plymouth houses today when relatives and friends of men in the cruiser H.M.S. Gambia, which arrived No. 1 jetty. Devonport Dockyard, arose to greet them home.

From 6.30 a.m. some relatives began to arrive at the Fore-street gate although they knew they would not be admitted until an hour later.

Commenting on the cruise, which had taken them to nearly 20 different countries, Capt. Evershed said he was astounded at the hospitality accorded to both officers and men.

In pre-war days, he said, the East Indies Station had a reputation for being hospitable to officers only. But during the last 12 months every member of the ship's company had had invitations to functions ashore at every port of call.

The following images from 1947, came from that mine of information Julian Best who served on HMS Gambia for the 1955 to 1956 commission:

If the ship is not stopping at Port Said, this can be delivered alongside the ship while they changing the pilot at port Said. Payment will be paid by Rupees or other money.

Hoping to see you well,
Yours Truely
Jim Irish & Sons.

Keith Best was in the Royal Navy from November 1950 to April 1960. He wrote the story of his life in the navy for his family and in October 2019, his brother Julian gave me permission to add some illustrations and present it here: 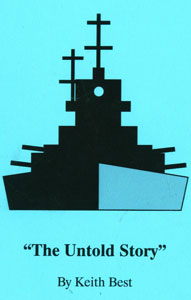 In September 2017, Julian sent me the following wonderful stories:

I got a little story for you, and it's true. About three months ago, I was down in the local builders yard, and as I walked from my car towards the showroom, I just happened to say to a lady, who was standing by the doorway "Nice bit of weather we are having at last" she answered me, and then asked about the car I was driving, as it is a 1977 Vauxhall Cavaliar, in very, very nice gleaming Polar White, so we chatted there, and I asked her where she was from, I can't remember the place she mentioned, somewhere in England, but I said it's your accent that made me ask, "Oh," she said, "we spent most of our lives living in Sri Lanka, or Ceylon as it was then", so I said "What part?", "Oh not a very well know place really, Trincomalee", "I've been there" I said, and with that her husband appeared from in the shop, so she told him that this gentleman has been to Trinco, "Holiday is it?" he said, "No" I said," I was in the Royal Navy, and we were stationed in Trinco in 55/56", He raised his eyebrows and said "DON'T TELL ME YOU WAS ON H.M.S.GAMBIA" "I sure was" I said, well we spent an hour chatting, he said that he was a supply officer for the R N, AND SUPPLIED stores to C48, during the conversation, it had to come out about the rest camp DYATALAWA ( CAN'T SPELL THAT) [it's actually Diyatalawa] I supplied them with provisions too, he said, One never knows who one will meet, I was chuffed to bits, and I think they were also.

About 20 years ago, I was up in Scotland, Keith lived up there, we were half way up the Royal Mile heading for the castle but had stopped as the women wanted to go in to see some childrens toy museum,Keith and I stood there on the side, when a guy the other side of the road shouted across, "What are you two Welsh ****** doing up here, it's to early for the rugby", I didn't know him but he was on the same mess as Keith on Gambia, fancy him recognizing us after all those years.

Another ship that Julian served on was the Colossus-class aircraft carrier, HMS Triumph. In March 1954, the ship was used to take the survivors of the fire and sinking of HMT (His Majesty's Transport) Empire Windrush from Algiers to Gibraltar. Some accounts use the ship's previous designation of MV (Motor Vessel) Empire Windrush.

In February 1954, the Empire Windrush left Yokohama, Japan, with various stops, for Southampton, UK. She was carrying 222 crew and 1,276 passengers, many of whom were wounded soldiers from the Korean War. HMS Triumph left Bermuda on March 18 for Gibraltar and then onwards to Devonport

Empire Windrush had left Port Said, Egypt and on Sunday, March 28, was sailing through the Mediterranean and was about 30 miles north-west of Cape Caxine, Algeria when there was an explosion and fire in the starboard boiler room and in the after funnel uptakes that killed four of the crew. The ship's firefighter quickly went into action but the main electrical power to the pumps, watertight doors, and radio quickly failed. At 6:23 am the first SOS was sent using emergency power and at 6:45 am the order was given to abandon ship.

Everyone from the Empire Windrush was picked up from the lifeboats by the Dutch ship MV Mentor, the British P&O Cargo liner MV Socotra, the Norwegian ship SS Hemsefjell and the Italian ships SS Taigete and SS Helschell that had all responded to the SOS calls. The survivros were all taken to Algiers.

At Gibraltar, the C-in-C Mediterranean ordered the destroyers Saintes and Whirlwind to proceed with all dispatch to the scene. In the event Saintes remained with the smoking and gutted hulk of the troopship and eventually took it in tow, whilst Whirlwind continued on to Algiers to begin the lift of passengers and crew. At 10.55 on March 28, Triumph anchored in Gibraltar Bay and two hours later she was ordered to Algiers in order to assist with the evacuation of the survivors. That day, as Triumph steamed towards Algiers, A and C hangars were prepared for the accommodation of the women and children from the crippled Empire Windrush, and at 10.25 on March 29, as she approached Algiers Harbour, she joined Saintes which was preparing to take the wreck in tow.

Two hours later, Triumph arrived at Algiers and after a pontoon had been secured on the starboard side, the embarkation began. At 16.00 that afternoon with all the passengers aboard, the carrier left Algiers for Gibraltar. Julian Best remembers that day:

It was clear that the survivors would have to spend the night on board, so we had to fix up temporary wires across the hangar deck in order that they could sling hammocks. However, many of our passengers were women and children and it was great fun helping them to rig them up. It was even funnier for everyone when they tried to climb into their hammocks and I remember a lot of people just took them down and slept on the deck.

Triumph arrived alongside Gibraltar’s south mole during the afternoon of March 30, and an hour later the disembarkation of passengers had been completed. As for Empire Windrush, the tow continued at a speed of three knots, but at 00.30 on March 30, after being towed less than 9 miles, the badly damaged ship sank stern first into 8,500 ft of water. Triumph left Gibraltar during the afternoon of April 1, and she arrived at 5 & 6 wharves of Devonport Dockyard four days later.

Julian was quoted in "The Colossus-Class Aircraft Carriers 1944-1972" by Neil McCart.