John was born in 1938 and served on HMS Gambia's 1958/60 commission as Leading Radio Electrical Mechanic. In June 2017, he recalled a "big crew fight at a social in Bahrain where the Band played God save the Queen whereupon the participants all stopped and stood to attention then restarted the scrap before all were carted off in a truck."

In September 2018, John wrote on the RNZN Communicators Association website:

In November 1968 [sic, I think he means 1958] HMS Gambia completed a mini refit with a crew of some 550 who arrived from Portsmouth on a special train. We flogged the North sea, the English Channel, The Atlantic, the Mediterranean, where in the Indian Ocean, we visited, the Seychelles Mauritius. Port Louis repairing typhoon damage, Maldives Islands Gan and capital Male where a chest containing alleged £8,000,000 in gold sovereigns was paid to the Sultan for allowing an air base to be constructed on Gan. Mombasa, Durban Cape Town, Wallvis Bay, Freetown, Sierra Leone, Bathurst, Gambia, Gibraltar and Portsmouth in June 1960. The comms receivers were B40s with the odd wartime B28. The transmitters were the original 600 series as was 285 early warning Radar. The rear 6 inch gun turret had been removed. Happy Days. My ambition at 80 is to be the last Gambian crewman Standing.

It was with deep sorrow that I read of the passing of A.B. Tom Hall. We first met during 1949 in Devonport Gunnery school, when we were both enrolled in class 26 R.C. 3s (Radar Control) Tom was a gentle and pleasant Irishman with whom I was to spend the next 4 years. We completed the gunnery courses and found ourselves in the barracks working party, which generally spent its time in the dockyard, working on a forlorn looking cruiser which had recently been towed from reserve and lay alongside the mole, to be refitted ready for a commission.

She was to be our home for the next 2 1/2 years. On our return to Devonport in '52, we once more found ourselves in the Gunnery School joining class 12 of R.C.2s. The course was completed mid year 1953. During our time in Gambia, Tom and I worked together in the Gunners Party for the last 18 months of the commission.

We were drafted to different ships and didn't meet again until returning to H.M.S Drake for demob. 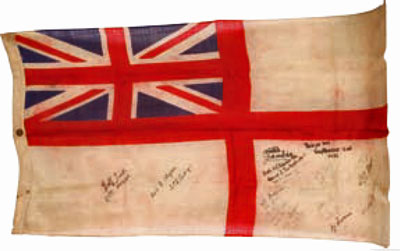 The ensign was originally owned by D. J. Hansen, a crew member who was present at Tokyo Bay in September 1945.

Fred Harling came from Banbury, Oxfordshire, and served on the 1950 - 1952 commission. Ken Booth remembers that he was sent home early suffering from tuberculosis (TB). Fred was friends with Alan "Striker" Goodwin and features in several photos with Alan.

Albert served on HMS Gambia as Petty Officer Telegraphist from May 1957 to November 1958.

Taffy served on HMS Gambia for the 1957/58 Commission as Electrical Mechanic. 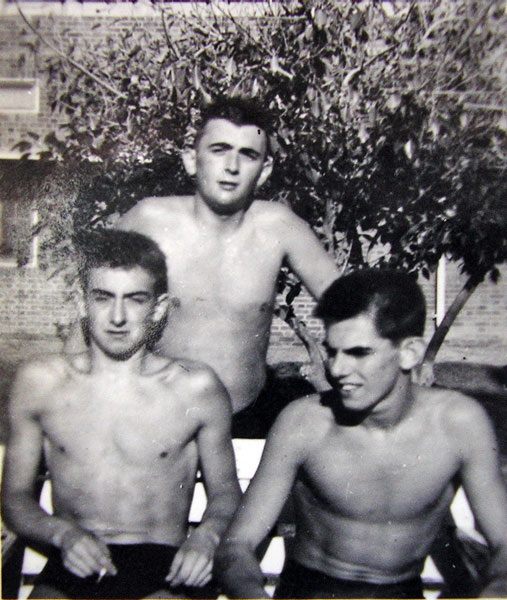 Jack Haysom was a Paymaster Lieutenant Commander (Acting Paymaster Commander) on HMS Gambia in 1943. The Admiralty Fleet Orders for June 10, 1943 lists him as being Mentioned in Despatches.

Victor Heather was a Supply Chief Petty Officer on HMS Gambia in 1943. The Admiralty Fleet Orders for June 10, 1943 lists him as being Mentioned in Despatches.

Ralph was born on March 19, 1911. He joined the navy in 1926 and served on Leander, Achilles, Gambia, in the Pacific, Atlantic, Red Sea, Mediterranean, Persian Gulf and Indian Ocean, reaching the rank of Petty Officer. Ralph passed away on October 14, 1993 aged 82. He is buried at Taihape Cemetery, New Zealand.

Edward was born in Gillingham, Kent on February 24, 1938. He left school when he was 16 and joined the Royal Navy as an artificer in September 1954. He served until October 1988 on various ships and submarines - HMS Gambia, HMS Dampier and HMS Forth in Mediterranean and Singapore, 1958-1968; served aboard submarines HMS Courageous, 1969-1973 and HMS Conqueror during Falklands War, 1982. He served on HMS Gambia for her 1958/60 commission and stayed with the ship afterwards to assist in her mothballing.

Peter served on HMS Gambia for her 1957/57 commission as an Able Seaman. The following photo was very kindly submitted by Christine Deane, daughter of David Judge who was also on the commission. 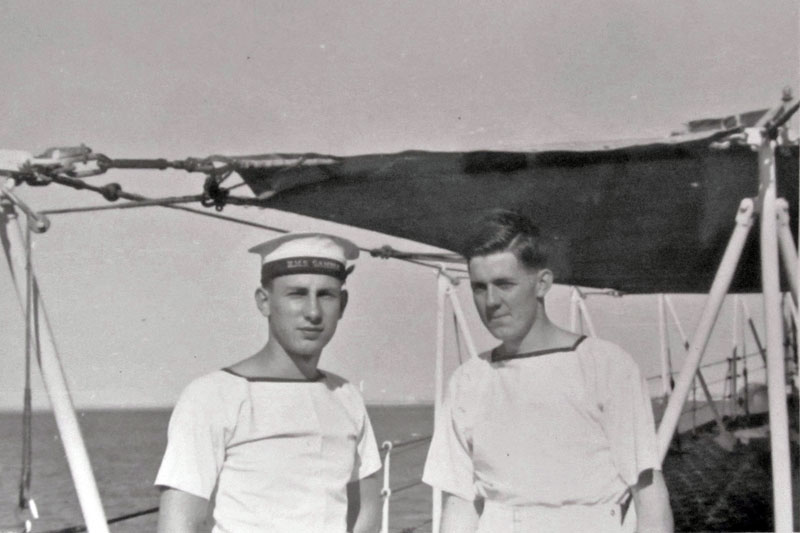 Even though I was National Service, I attained the rank of Leading Seaman because I had joined the RNVR when I was 18. When I was 21 and reported for my National Service I had 3 years in the RNVR, this gave me a credit of 18 months sea time. After serving aboard HMS Gambia for six months in Trincomalee, I had enough sea time (2 years) to sit and pass the Leading Seaman exams. It was probably fairly rare for a National Serviceman to attain the exalted rank of Leading Seaman, mainly because of the sea time requirements. I have a map showing the 1955/56 cruise of HMS Gambia hanging in my office. My wife (married 60 years this year) and I live in Toronto, Canada

Mervyn was born in June 1930 and was the ship's writer on HMS Gambia between 1949 and 1951. He was originally from Bristol but lived in Liverpool for around 60 years.

In September 2017, I received an email from Dave, Mervyn's son saying that Mervyn passed away peacefully on the morning of Saturday, September 16, 2017. He had been suffering from cancer. Dave wrote that his dad "served the Royal Navy for a total of 12 years, mainly on HMS Urania and HMS Gambia. There can be no doubt that it was his time on HMS Gambia that he recalled most often for the 3 years he served as Ships Writer in the years 1948 - 1951."

A ship's writer is a clerk responsible for paperwork connected with keeping the ship's accounts, and carrying out administrative tasks.

Lance was born in Kawhia, New Zealand in 1925, and joined the RNZN after leaving school at age 17. He served on HMNZS Gambia during WWII and was present in Tokyo Bay for the Japanese surrender on September 2, 1945. After the war, Lance attended Massey University for an agricultural course, before he got a farm manager's position. Then, in 1950, newlyweds Lance and Norma bought their own farm at Aria. Lance went on to become a very well respected sheep shearing judge and was made a life member of the New Zealand Championships in recognition of his contribution over many years. Lance passed away at home on Friday, May 23, 2014 and was buried on May 27, 2014. 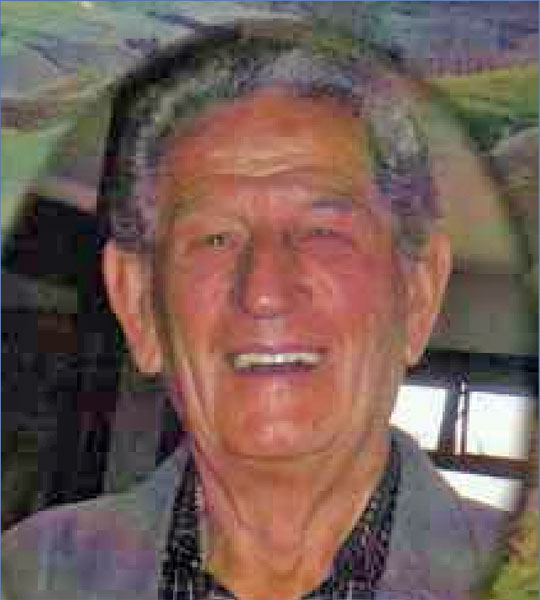 Tom Keefe, Leading Electrical Mechanician on the 1958 to 1960 commission, was an extra in the 1960 film "Sink the Bismarck" and was seen as a German sailor.

Gordon's service number was RMBX849 and he was a Band Corporal in the Royal Marines in which he served from 1935 to 1955. The dates are uncertain, but he served on HMS Hermes, HMS Ocean, HMS Gambia and HMS Pembroke. He lived in Deal, Kent.

Arthur was service on Gambia as Ordinary Seaman, service number 758,2 when he was taken ill with an unspecified disease and died on June 12, 1944

Dennis joined Gambia in 1945, after travelling to Perth, he then made his way to Sydney by rail, only to find out that the ship had sailed without him. Dennis finally caught up with the ship in Guam, from where they went to sea and was present at the surrender of the Japanese Forces.

Arthur served on HMNZS Gambia during WWII as a gunner. He passed away in 2004.