By the late 1930s the American and Japanese were bringing into service large 6-inch cruisers carrying fifteen guns in triple turrets. Britains initial reply was the eight ships of the Southampton Class, carrying twelve 6-inch in triple turrets. Armour protection was greatly increased with a 3 to 4-inch belt. These were very fine ships and were followed by the larger Belfast and Edinburgh which had a heavier belt. All these were completed before the war, while eleven ships of the Colony Class were building, being slightly smaller than the Southamptons, but with the Belfast's armour: they could be distinguished from the former by their upright funnels. Of the Southampton's three were lost; the Manchester, which had been the last cruiser to appear in the Far East in white and buff before the war, was torpedoed by an Italian motor-torpedo-boat in 1942. The Southampton had previously been lost to German aircraft during the most ferociously attacked of the Malta convoys in January 1941, while the Gloucester succumbed to the same enemy during the expensive operations resulting in the loss of Crete.

Of the rest, the Sheffield had a distinguished war record which included taking part in the sinkings of the Bismark and Scharnhorst and she was at the Barents Sea action on 31st December 1942, when she arrived in time to save Sherbrooke's heroic destroyers and drive off, with the Jamaica, the German cruisers Hipper and Lutzow; an action that sickened Hitler of his surface forces. The Sheffield continued after the war to be the last of her class and was scrapped in 1967. The Glasgow, with the Enterprise, engaged German destroyers in a running action in bad weather in late December 1943 and sank three of them. The two cruisers were under air attack at the same time. The Liverpool, which had her bows blown off by an aerial torpedo in 1940, was repaired but torpedoed again in June 1942 and remained out of servce until October 1945. The Birmingham distinguished herself in the bombardments of the Korean War of 1950 to 1952.

The Belfast and Edinburgh with their wide-spaced funnels separated by the main mast differed very much in appearance from the Southampton and Colonies. The Belfast was mined and broke her back early in the war but was repaired in time to take a distinguished part in the sinking of the Scharnhorst. She is Britains last conventional cruiser afloat, and has been preserved as a museum ship moored on the River Thames. The Edinburgh was sunk during an Arctic convoy action in May 1942.

The Colonies numbered eleven ships which completed beween 1940 and 1943. They were the Bermuda, Ceylon, Fiji, Gambia, Jamaica, Kenya, Mauritius, Newfoundland, Nigeria, Trinidad, Uganda. The growing preoccupation with anti-aircraft defence caused the suppression of turrets in the later ships,so as to save space and weight for more anti-aircraft guns. Two were lost in the war, both to German aircraft; the Fiji off Crete in 1941 and the Trinidad in the Barents Sea in 1942. The Gambia was loaned to the Royal New Zealand Navy and the Uganda to the Royal Canadian Navy. The Kenya and the Nigeria were damaged by torpedoes during the Malta convoy called 'Pedestal' in August 1942. The Jamaica, as already mentioned, fought the Lutzow and Hipper in the Barents Sea and she was also in action, steaming with the Duke of York, when they sank the Scharnhorst. After the war these cruisers continued in service into the 1960's, the last survivor being the Gambia. The Nigeria, which was the only one to retain her X turret, was sold to the Indian Navy in 1957 and the Newfoundland and Ceylon were sold to the Peruvian Navy in 1960.

A third batch of almost identical cruisers, the Superb, Swiftsure and Minotaur, followed. The Minotaur was transferred 'New' to Canada as the Ontario, and the Swiftsure was involvd in a dramatic collision with the destroyer Diamond in 1953. The paint-store in the Diamond's bows caused a fierce fire to rage under the cruisers bridge, which dropped 2 feet. Much time and money was spent on refitting her in Chathams dockyard but this was not completed and she never served again. The Superb, although the latest of the Southampton and Colonies type, was one of the first to be broken up. Prewar ships lasted longer - the difference between wartime and peacetime building.

It was inevitable that information and pictures of the other ships in the Crown Colony Class of cruisers would be received and those are presented here:

The following newspaper cuttings come from former Royal Marines Musician Dave Simmonds. It is thought the clippings come from the Straits Times of Malta, maybe in the early 1980s. 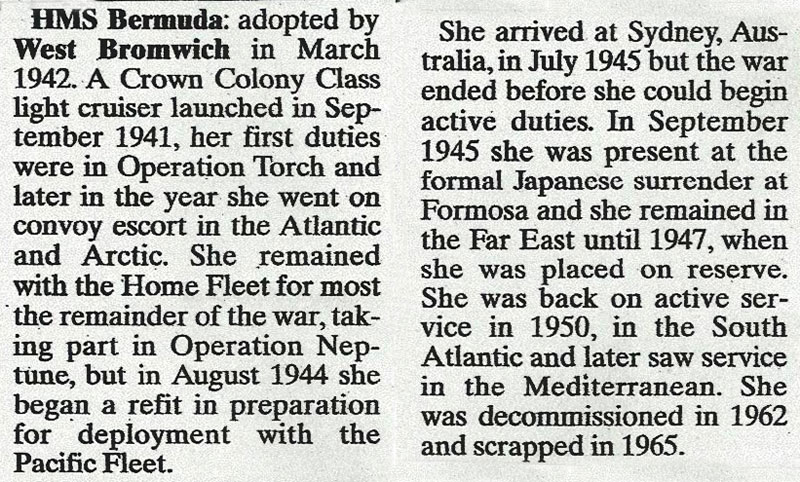 HMS Bermuda: Adopted by West Bromwich in March 1942. A Crown Colony Class light cruiser launched in September 1941, her first duties were in Operation Torch and later in the year she went on convoy escort duty in the Atlantic and Arctic. She remained with the Home Fleet for most of the remainder of the war, taking part in Operation Neptune, but in August 1944 she began a refit in preparation for deployment with the Pacific Fleet.

She arrived at Sydney, Australia, in July 1945 but the war ended before she could begin active duties. In September 1945 she was present at the formal Japanese surrender at Formosa and she remained in the Far East until 1947, when she was placed on reserve. She was back on active service in 1950 in the South Atlantic and later saw service in the Mediterranean. She was decommissioned in 1962 and scrapped in 1965.

In February 2019, Terry Bateman sent me some infomation about his father, Roy Bateman, who joined the Royal Navy just after the end of WWII. Roy's first ship was HMS Nelson after she had her rear turret removed, he also served on HMS Jamaica, HMS Swiftsure, snd HMS Phoebe. Terry remembers him saying HMS Phoebe was his favourite ship. 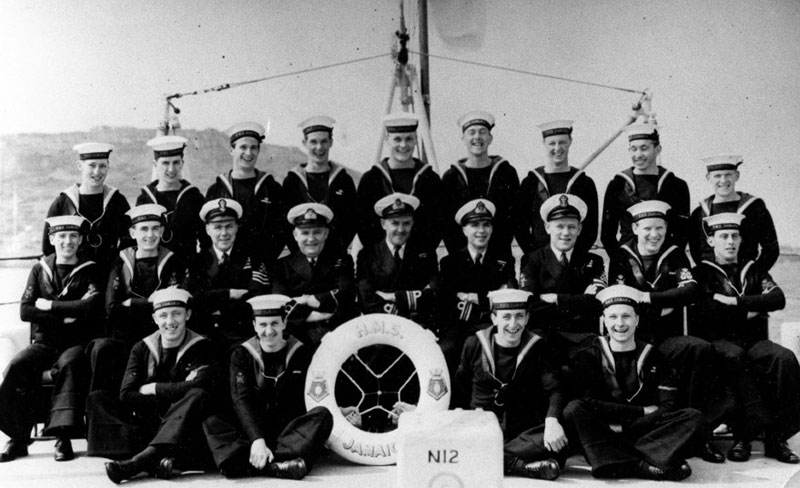 Roy is second row, second from left of this photo from HMS Jamaica
Naval uniforms did change over the years and Alan Priestman suggests that because of the white caps and dark sea jerseys, this photo would have been taken around 1956. 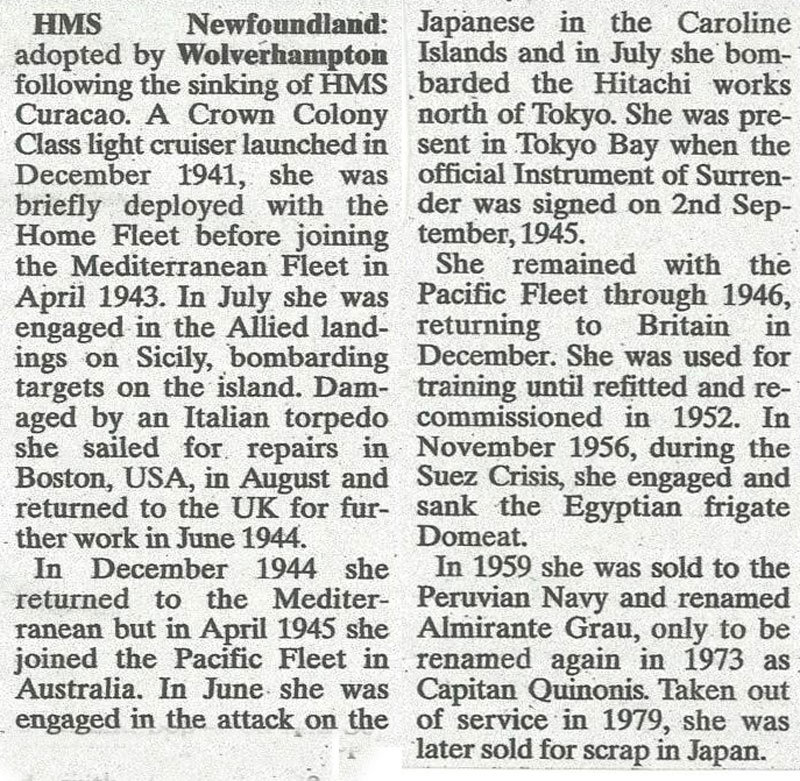 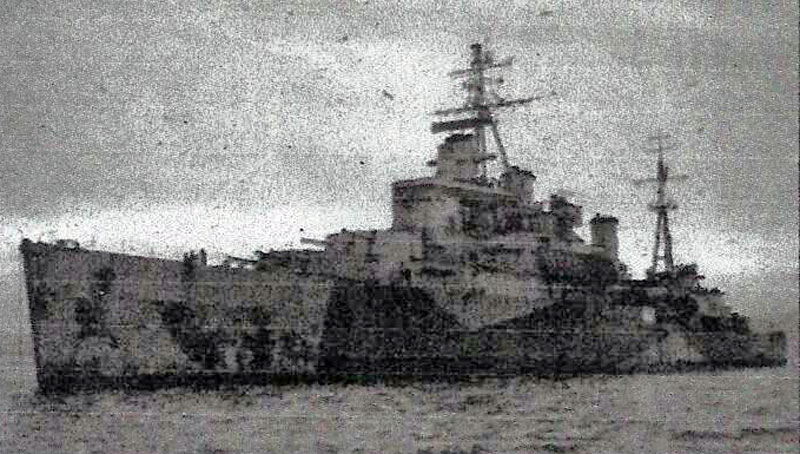 HMS Newfoundland: adopted by Wolverhampton following the sinking of HMS Curacao. A Crown Colony Class light cruiser launnched in December 1941, she was briefly deployed with the Home Fleet before joining the Mediterranean Fleet in April 1943. In July she was engaged in the Allied landings on Scily bombarding targts on the island. Damaged by an Italian torpedo she sailed for repairs in Boston, USA, in August and returned to the UK for further work in June 1944.

In December 1944 she returned to the Mediterranean but in April 1945 she joined the Pacific Fleet in Australia. In June she was engaged in the attack on the Caroline Islands and in July she bombarded the Hitachi works north of Tokyo. She was present in Tokyo Bay when the official Instrument of Surrender was signed on 2nd September, 1945.

She remained with the Pacific Fleet throught 1946, returning to Britain in December. She was used for training until refitted and recommissioned in 1952. In November 1956, during the Suez Crisis, she engaged and sank the Egyptian frigate Domeat.

In 1959 she was sold to the Peruvian Navy and renamed Almirante Grau, only to be renamed again in 1973 as Capitan Quinonis. Taken out of service in 1979, she was later sold for scrap in Japan.