There are several fine models of HMS Gambia, here is a selection of them.

This model was built by apprentices in HM Dockyard, Rosyth in 1953. It can now be seen in Fife Council Museum. These photos were taken by Sheila, the wife of Keith Best who served on the HMS Gambia for her 1955/56 commisssion.

John (Jan) Birch served on HMS Gambia as an Able Seaman from 1949 to 1952. His son, also named John, created a radio-controlled model of the ship in 2014 and in July 2020 sent Bill Hartland updated photos of the model who very kindly passed them on for inclusion in this website. The model recreates HMS Gambia as she appeared for the 1950/52 commission. 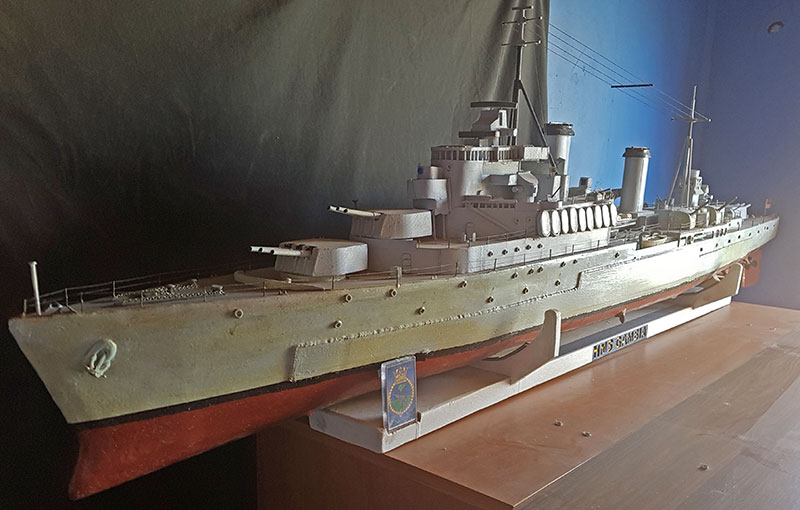 In 2007, model maker John Edwards created a very nice model of HMS Gambia. Pictures fo the model can be found on John's website at well as the website of the Solent Radio Controlled Model Yacht Club.

I was very interested to discover the HMS Gambia website, because since before last Christmas I have been building a 1:96 scale model of the ship (about 6ft) and she had her initial float and ballasting a couple of days ago. I was amazed at how much lead was needed and even a bottle of olive oil and one of washing up liquid before she reached her water line! She is going to look very splendid on the water eventually and I have chosen to depict her in her earliest guise with rather delicate camouflage of pale greys.

If any of your members have any observation (or criticisms) I would be very interested to hear them. I have no particular axe to grind, but am very interested in being as historically accurate as possible while building a working model.

With best wishes to all your members

These are some (slightly blurry) images of HMS Gambia's Walrus airplane for the model.

The official launch of the model was made on Portishead Lake on September 21, 2008, with HMS Gambia Members present. The video below was taken in June 2011 and shows some developments of the model of HMS Gambia kindly made by John Edwards. Note that he accepts he still has some issues to resolve with the 6" A and B Turrets which he has enabled to turn and raise and lower all triple barrels.

Armistice in Cambridge is an event held at Might River Domain, Lake Karapiro, Cambridge, New Zealand to commemorate Armstice Day and features models built by, among others, Kiwi Modellers. These photos were from the 2012 exhibition and were supplied by Graham Beeson via Bill Hartland:

There have been several paintings and drawings made of HMS Gambia:

This advert for Skytrex appeared in the December 2001 edition of Navy News. The company is still around but does not appear to offer these models any longer. 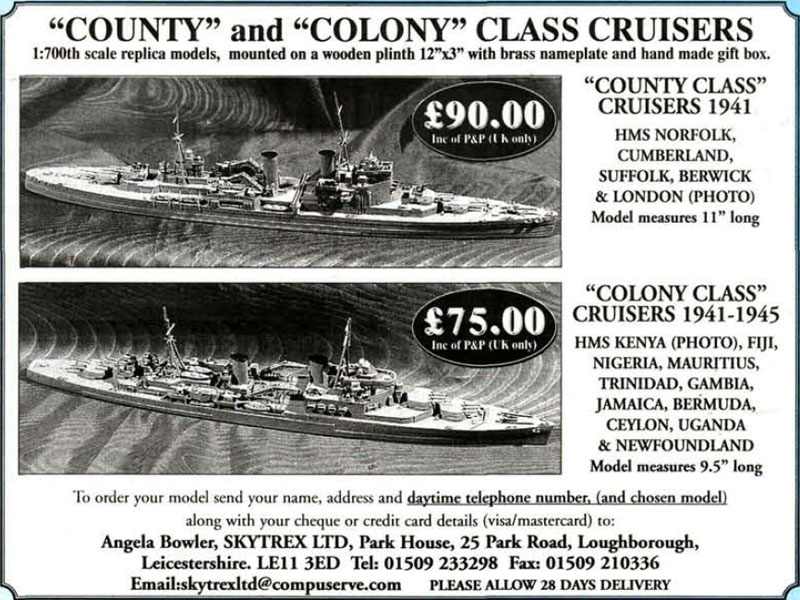 Fleetscale provide a series of kits and accessory packs to make models of various ship including HMS Gambia and other Crown Colony-class cruisers.