In May 1957, Gambia sailed again for the Persian Gulf station, as the last flagship on this station, and returned to Rosyth on 19 September 1958. On 4 November 1958 she recommissioned for the 1st Cruiser Squadron in the Mediterranean. She deployed to the Far East on 4 December 1959 to relieve the cruiser Ceylon in the Red Sea. HMS Gambia returned to the UK via South Africa with a visit to Freetown and the Gambia, before arriving in Portsmouth in July 1960. 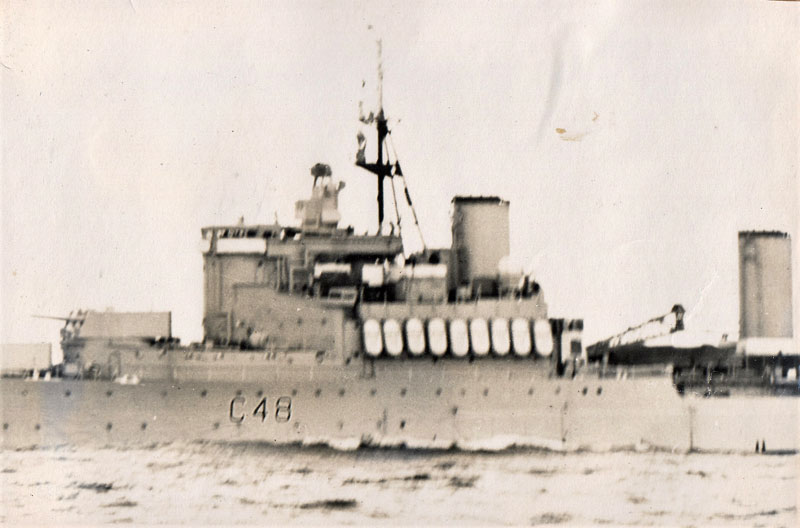 An unusual photo of HMS Gambia. What makes this unusual is that I received it in September 2018 from Sergey who has a Russian email address and he said the photo was taken from one of the Soviet intelligence gathering AGI (Auxiliary, General Intelligence) trawlers. The trawlers were deployed to the Western Atlantic from the Kola region naval base of Murmansk and Sergey thinks the ships met each other around May/June 1960, close to UK waters.

For the last months of 1960 she served in the South Atlantic and the Home Fleet before entering the reserve in December of that year, her crew largely going to the new cruiser Blake. Gambia was paid off to reserve in December 1960 and she remained at Portsmouth until she was put on the disposal list and sold to Thomas W. Ward for scrapping.

HMS Gambia was almost saved by the Imperial War Museum as a museum ship instead of HMS Belfast. On April 14, 1967 museum staff visited HMS Gambia, which was moored in Fareham Creek, Portsmouth at the same time as HMS Belfast. What they were interested in was simply preserving one of the 6" gun turrets which were rapidly going out of service. Shortly after, they realized they could preserve an entire ship. Since Gambia had already severely deteriorated, attention was turned to the saving of the Belfast.

I'm not sure how true this is, but several people have told me that at least some of the guns on HMS Gambia were scavenged to replace the rusting ones on HMS Belfast. 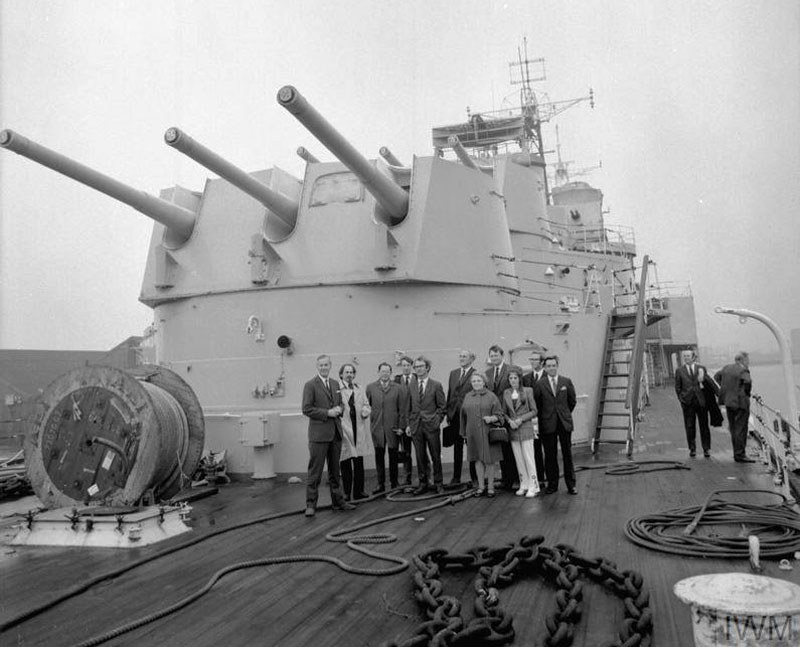 HMS Gambia at Fareham Creek, 1967
This photo has been used elsewhere as an illustration concerning the saving of HMS Belfast, but it is thought this is HMS Gambia 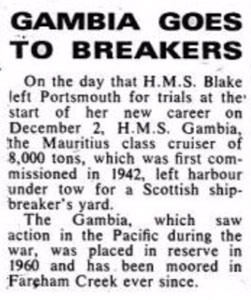 The notice of HMS Gambia's scrapping that appeared on page 3 of the January 1969, Issue 175 of Navy News. The text reads:

On the day that HMS Blake left Portsmouth for trials at the start of her new career on December 2, HMS Gambia, the Mauritius class cruiser of 8,000 tons, which was first commissioned in 1942, left harbour under tow for a Scottish shipbreakers yard

The Gambia, which saw service in the Pacific during the war, was placed in reserve in 1960 and has been moored in Fareham Creek ever since.

Most the crew who served on HMS Gambia's last commission was transferred to HMS Blake. 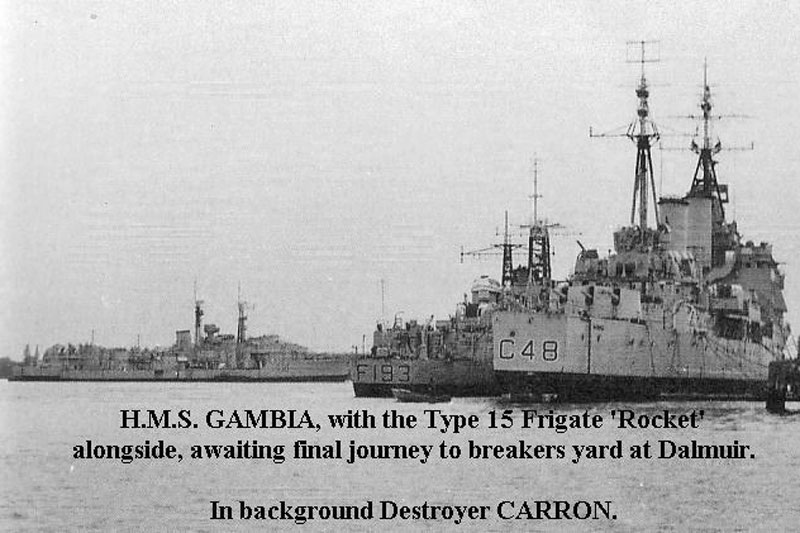 HMS Gambia with the type 15 frigate, HMS Rocket alongside awaiting the final journey to the breakers yard at Dalmar.
In the background is the destroyer HMS Carron. 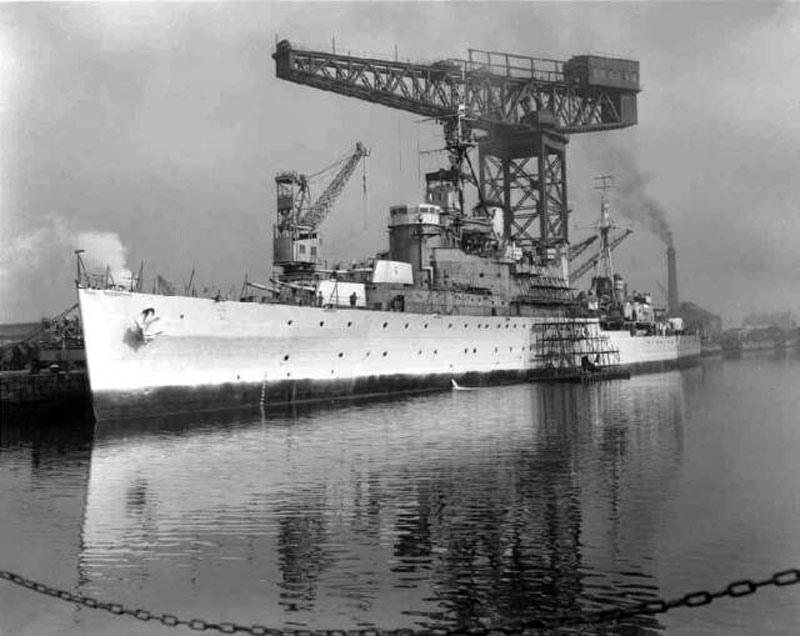 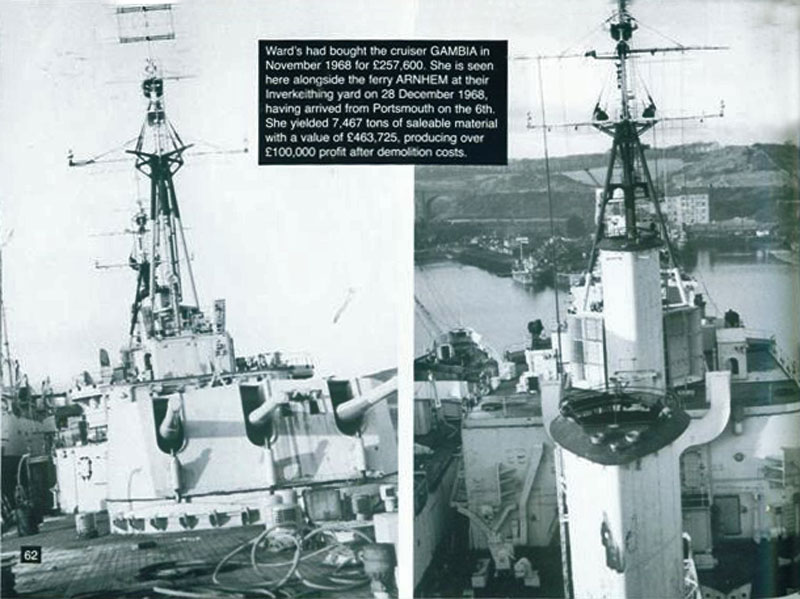 HMS Gambia at Ward's breaking yard alongside the ferry Arnhem on December 28, 1968

This wasn't quite the last that was heard of HMS Gambia though.

The Southern General Hospital (SGH) was a large teaching hospital with a complement of approximately 900 beds. The Hospital was located in Linthouse in the south west of Glasgow, Scotland, and provided a comprehensive range of clinical services. A new maternity unit was opened in 1970 and the Institute of Neurological Sciences followed in 1972. Part of these improvements and additions included a new Whole Body Monitoring Unit. This unit incorporated armour plating six inches thick, removed from HMS Gambia when she was broken up as radiation shielding. The history of the Southern General Hospital includes an image of the Whole Body Monitoring Unit: 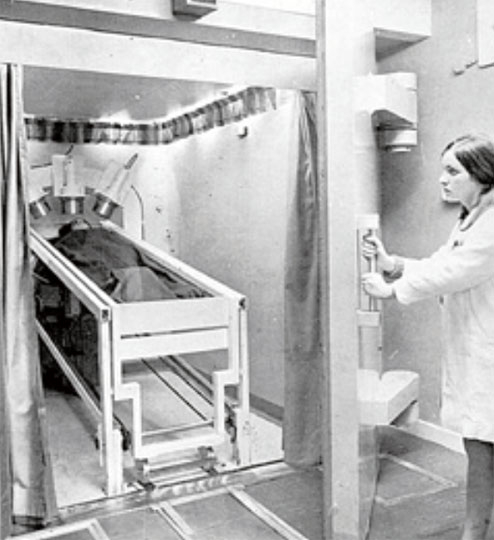 Steel from warships were used for these facilities. The whole body monitor at the Radiobiological Research Laboratory, now the Defence Science and Technology Laboratory (DSTL) at Alverstoke, Gosport in Hampshire was made from sections of the 150-millimetre-thick (5.9 in) steel plate recovered from HMS Vanguard when that was broken up in 1962. One of the reasons this steel was used was given in the National Security and Resilience - Defence Management Journal, Issue 31 and was because the pre-atomic bomb era steel ensured a very low background reading in the room.

In August 2019, Billy Guy wrote in the Facebook Royal Navy Enthusiasts Group that "I think Gambia's officers mess bar was used to build the bar In RAF Pitreavie Castle."

RAF Pitreavie Castle was a joint RAF/Royal Navy Area Combined Headquarters (ACHQ) near Rosyth, Scotland. I have been so far unable to confirm what Billy wrote. 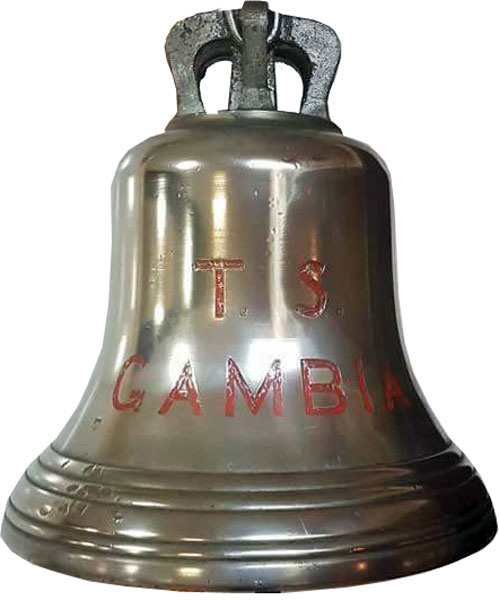 The Places of Remembrance Project or Poppy Places is a New Zealand initiative, started in 2014, to commemorate places that have an association with the people and events of New Zealand's military operational services overseas.

In November 2018, a new road in Whitianga was named Alf Simpson Drive. The road is located at the northern end of Cook Drive, Whitianga in what is known as the Pacific Estate subdivision. Alfred (Alf) Alexander Simpson applied to join the Navy in 1943 and served on HMNZS Gambia from 1944 to 1946, and the road was given the designation of a Poppy Place to commemorate his service. 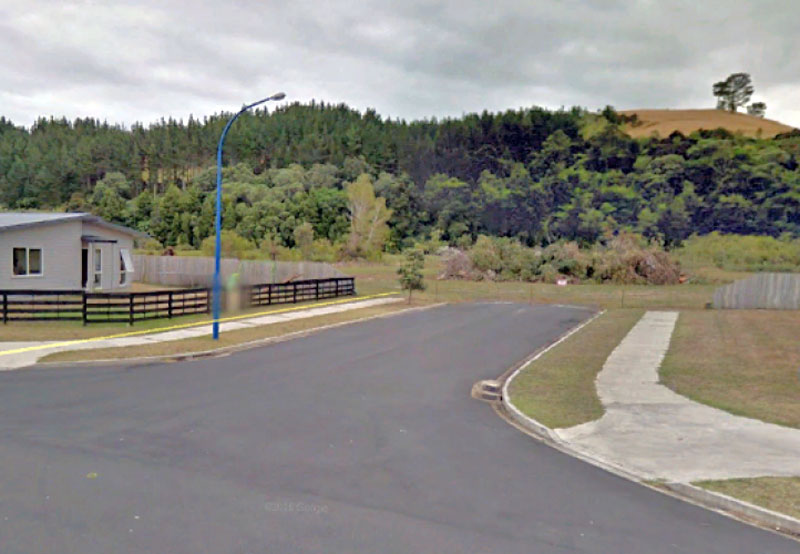 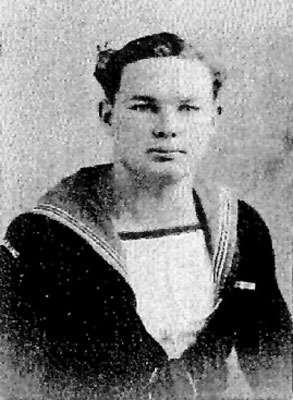 All the above information and images come from Poppy Places: Alf Simpson Drive, Whitianga