Humphrey served as a Lieutenant Commander on HMS Gambia for the 1952 to 1954 commission. Some of Commander Grace's naval memorabilia was auctioned by Greenslade Taylor Hunt of Taunton, Somerset, on September 2, 2016. The memorabilia comprised a British Royal Navy dirk, the 45cm blade etched with Royal crowns, a fouled anchor and scrollwork, the gilt brass hilt comprising a curved quillon with acorn terminals, a wire-bound fish-skin grip, and a lion head pommel, in its leather scabbard with gilt brass mounts and suspension rings, overall 60cm long; a brushed silk bicorne hat with bullion thread detailing, by Gieves, size 7 1/4, and a pair of dress epaulettes, in original painted tin; a Second World War M.I.D. group of four medals, comprising the 1939-45 Star, Atlantic Star, Italy Star and War Medal 1939-45 with mentioned in despatches oak leaf, unnamed as issued, mounted for wearing; an associated group of miniature medals, and a medal ribbon strip, both mounted for wearing; a book recording the commissioning of H.M.S. Gambia 1952-54; and a quantity of black and white photographs. 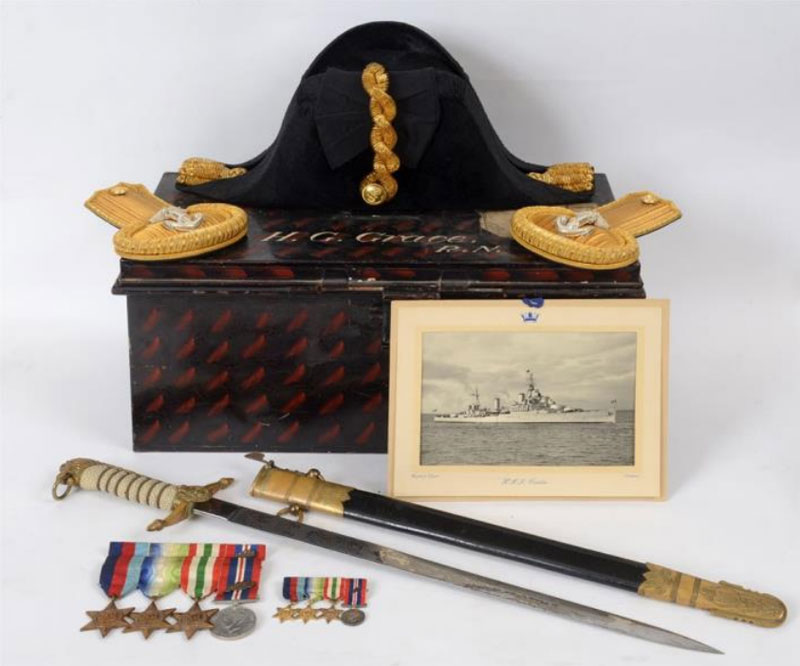 At the start of WWII Lt Cmdr Grace had just been appointed to HMS Varnoc as an A/S Lt. HMS Varnoc was a British V-class destroyer with a complement of 70 officers and men. In June 1940, HMS Varnoc participated in the evacuation of British Troops from Norway and St Nazaire, France. Convoy patrols in the Atlantic followed, culminating in an action on March 15, 1941 which will be long remembered in Naval history. On that day, HMS Varnoc sank two German submarines U99 and U100 which were commanded by two of the Kriegsmarines top U-boat Captains, Joachin Schepke and Otto Kretschmer. Details of these two actions are as described by Lt. Cmdr Walter Edney from 'Recollections of WWII':

After a little more than a mile, the silhouette of a U boat could be seen on the surface, so without hesitation our Captain gave the order to Stand by to Ram. This we did in no uncertain manner, at full speed, hitting the U-boat amidships and toppling her over. It bought Varnoc to a sudden standstill, embedded in the U-boat which was only cleared by putting both engines full astern. The U-boat rose high in the air and sank, the Captain still on the bridge wearing his white cap but badly injured, went down with her. It subsequently transpired that the U-boat we had sunk was U100, Captained by a Lieut Capt Schwepke, a U-boat ace who had sunk many thousands of tons of British shipping.

After a short while, a U-boat surfaced just astern of us, so close that it was necessary to move out of the way fairly quickly for fear of being torpedoed or fired upon. It was not to be. In fact both Walker and Varnoc opened a cross fire at the U-boat. It was clear that she was badly damaged and the crew would have to surrender. The U-boat flashed a message to Walker to the effect that she was sinking. The bow of the boat subsequently rose in the air and she slithered down to her grave. This was U-boat U99, captained by Lt Cmdr Kretschmen, the unchallenged ace of the German U-boat fleet after Prien, who had been sunk with his U-boat a few days before by HMS Wolverine. HMS Varnoc was commanded by Lt Cmdr J. G. W. Deneys, who was subsequently awarded The Distinguished Service Order for these actions.

On November 3, 1942, Lt. Grace was appointed to HMS Quail. He took part in the Salerno landings during September 1943. On 15th November, HMS Quail, whilst on patrol in the Adriatic, struck a mine and was beached the following day. 1944 found Lt Grace serving on HMS Diomede, a boys training ship at Devonport. He was back to sea in January 1945 serving on a battle class destroyer, HMS Camperdown. Promoted to Lt Cmdr in 1948 he saw service on HMS Gambia between 1952 and 1954.