It was reported in the July 1998 issue of Navy News that Commander D. C. Nairne had died. The ships he served on are listed as Gambia, Venus, Wakeful, Dryad, Drake and Osprey.

Neale was an Able Seaman on the 1957/8 commission. He was also a keen ornithologist or twitcher, at least he was interested enough to send reports to Royal Naval Birdwatching Society. In Volume 12, December 1959 issue of The Sea Swallow he reported seeing various species of Cormorants, Frigates, Gulls, Noddies, Petrels, Shearwaters, and Terns on the commssion around the Indiana Ocean includingthe Arabian Sea, Persian Gulf, and Chagos, Mauritius, Reunion, and Sand islands.

Daniel was a stoker and served in the Royal Navy from 1938 to 1950. He was on HMS Gambia from October 1948 to November 1949. His records say he was DBs79 and donkey boiler watch keeper. As far as I can tell, HMS Gambia was laid up during those years and was maybe under consideration for being scrapped.

Bill, CPO CEM(L). Served 1945 - 1968 on board HMS Bermuda, Roberts, submarine Acheron, t. Kitts, Delight, Leeds Castle, Rame Head, Rhyl, Forth and as CPO in charge of electric and electronic Close Range Gunnery Systems on board HMS Gambia (1958 - 1961). Upon leaving the Royal Navy he worked on the Polaris guided missile programme on assignment with the US Navy in Florida. He was a member of the HMS Gambia Association and the Royal Navy Association. He died on March 25, 2012 aged 84. From Navy News, May 2012

The obituary page of the December 2001 issue of Navy News lists T. H. Norman as being a Commander who served on Furious, Sheffield, Volage, Caledonia, President, Gambia, Bellerophon, Nelson, and Tamar.

There were no dates on the original HMS Gambia website but it did contain this letter from Tom Lambert, Director of Music R.M. (Retired.) about the death of Dan O'Connell who was Royal Marines Band Sergeant on the 1957/58 commission.

It is with great regret that I write to inform you of the death of former Royal Marines Bandmaster Dan O'Connell. He was a character with many faces. He could be, as he often was, a fine Violinist and a reliable Trumpet. In these roles many a Bandmaster and Sgt. were grateful for his presence. He was a man of high intelligence and would beat most people in debate even if he knew little of the subject being debated. Although he may not have used these many admirable characteristics to best effect, he did manage to fight his way up to the rank of Bandmaster. I believe he was even top of his Bandmaster's class.

Dan was an outstanding sportsman, particularly as a rugby player. He often played for the Corps Fifteen and because of his courageous play at full back, was prone to the odd injury.

He was a great friend of mine and I therefore immensely regret his death.

Leo served on HMNZS Gambia during WWII as CPO Radar. He came from the West Coast of South Island, New Zealand and passed away in 1977.

George was a Lieutenant Commander on HMS Gambia for the 1957/58 commission. His son, Nigel, was christened onboard the ship in Rosyth dockyard on October 5, 1958. His baptism certificate was signed by the ships Chaplain, Kenneth Evans. George passed away in 1992.

John Peers came from Warrington, Cheshire and served on HMS Gambia from 1950 to 1952 as an Able Seaman radar operator. He was a winner of a Silver Oar earned in the fleet regatta. His son, David, emailed me in April 2018 and said that he went to Malta, Cyprus, Gibraltar, North Africa and possibly through the Suez Canal to India. John died in 2002 from prostate cancer.

Ted was born in 1933 and served in the Royal Navy from 1949 to 1966 in the communication branch. His first ship was HMS Superb and he also served in HMS Gambia, Bermuda and Glory. Ted, has two sons and two daughters, and was living in a flat in Maidstone but had a couple of falls and decided to move to the Blind Veterans UK centre at Ovingdean, near Brighton in 2013.

In an interview for Navy News in 2017 when he was 84, Ted said that "I often get people visit me who I used to serve with. I like meeting people. I've been around the world a few times, through Suez and the Panama Canal. I definitely miss the comradeship that you get in the Navy."

John was a member of the South African Training Ship General Botha Old Boys Association where this information comes from:

On January 1, 1944 John was appointed Temporary Midshipman Royal Naval Reserve. Served on HMS Newcastle and HMNZA Gambia. In 1944/45 he was serving as a midshipman on HMS Gambia. In 1945 he received Commander in Chief's commendation for valuable service.

1965 – 1986 joined United Nations. Served in London, Botswana, Saudi Arabia, Persian Gulf, Iran, Thailand and elsewhere. 1985 retired and then practiced as a Consulting Engineer based in the U.K.

John passed away on September 26, 1994 and his ashes were put to sea off Simon's Town.

Jack joined the Navy when he was an 18-year-old junior linesman working for the Post Office and Telegraph Department in Ranfurly, Central Otago, New Zealand in 1943. When the Gambia left Auckland in December 1944, telegraphist Pringle was 19.

Jack was interviewed by Stuff in August 2020 and said of his time with the British Pacific Fleet that "It was all in code so you had to be wide awake, you couldn’t guess words. It was a continual stream of signals from the commander in chief of the Americans. After our coders decoded it, it was passed on to the appropriate ships."

William served on HMS Gambia as Chief Petty Officer on the 1952 to 1954 commission. His service number was D/JX.136118. The London Gazette of 16 February, 1954 reported that "The Queen has been graciously pleased to approve the award of the British Empire Medal (Military Division) for distinguished service in the Greek earthquake relief operations in August, 1953" to him.

John was the son of John and May Pye, of Breightmet, Bolton, Lancashire. John was an able seaman on HMNZS Gambia and passed away on October 4, 1944 aged just 21. He is buried at Colombo (Liveramentu) Cemetery, Sri Lanka.

Geoff served as a Royal Marine on the 1957/58 commission and passed away on February 1, 2013. Fellow Marine and friend Bob Jackson wrote in the original HMS Gambia guestbook:

Geoff (sometimes Dusty) and I became friends in the Marines mess during the 1957/8 commission. Other Marine friends included John Crawford, who passed away in July 2012, Mick Jordan and Scouse Tait. Following the commission Geoff went to Eastney where he had a serious accident in the gym, breaking his neck and becoming wheelchair dependent for the rest of his life.

Although he had to leave the service he never gave up. He was involved in para olympic sport at Stoke Manderville. He trained in accounts and had a full working life. He married Sandra and had two children and two grandchilden who will all miss him greatly. Despite his problems he never gave up and was a fighter all his life. I am pleased that we retained our friendship and I visited him in hospital just a few days before he died. Geoff was a great character and a credit to the Royal Marines. 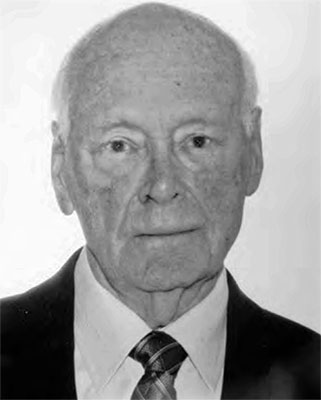 The following came from the fifth edition of the Military Service Recognition Book published by the Ontario Command of the Royal Canadian Legion, which I believe was published in 2018.

He also worked with the US Navy in their Shipping Control Organization. Gerald joined the British Navy as a boy Signalman 2nd Class, where he was referred to as "the lowest form of pond life". Gerald was discharged in 1988. He was awarded the CD II, Korea Medal, United Nations and NATO Medals. Gerald and his wife reside in Halifax, Nova Scotia. He has been a member of the Legion Branch 129 White Ension for 53 years.

Harry Riley was a Commander who died at sea on January 14, 1943 while serving on HMS Gambia. He was born in 1919 so was aged 39 or 40 when he died. He was Fleet Commissioner, China Fleet and was the son of George Bruce and Margaret Ann Riley, of Colne. A relative of his, Royal Marine Colour Sergeant George C. McAvoy, served on HMS Gambia's 1954/56 commission.

Ray as he was usually known was a member of the South African Training Ship General Botha Old Boys Association where this information comes from:

Ray was born on September 15, 1923 in Durban. His parents were Sidney and Nelie Rippon who had four children – Merle, Desmond, Ray and Alison. The family moved to Johannesburg where he attended King Edward High School before going to the General Botha where he matriculated.

After WWII, Ray married Amy and they bought a bungalow on 4th Beach, Clifton in Cape Town where they began their life together. Subsequently they moved with their four children to Rondebosch. They were happily married for over 50 years.

Ray spent most of his working career as a manufacturer’s representative (middleman/wholesaler) selling clothing, textiles and groceries in the western and southern Cape. He and his brother-in-law, Piet Maas (ex-RAF Pilot) ran a very successful agency business for over 35 years. They had more than a dozen representatives on the road at one stage. They were based at the old Robbs Motors Building near the Rondebosch bridge. passed away on 31 January 31, 2005.

Rippon served on HMS Gambia, Condor and President. RM Condor is a large Royal Marines base located near Arbroath in East Angus, Scotland. HMS President is a "stone frigate", or shore establishment of the Royal Naval Reserve, based on the northern bank of the River Thames near Tower Bridge in the London Borough of Tower Hamlets. I have no information of when Rippon served on HMS Gambia. He passed away in 1995.

Arthur served as Engineroom Artificer on HMS Gambia from 1941 to 1943. He was present on the ship's handover to the New Zealand Navy in September, 1943. He later became president of the HMS Gambia Association. Arthur passed away in February 2013.

Darcy was a stoker on HMNZS Gambia during WWII. He passed away on July 26, 1997 at Matamata, Waikato, New Zealand.

Robert Rye C/M39920, was a Master at Arms on HMS Gambia in 1943. The Admiralty Fleet Orders for June 10, 1943 lists him as being awarded the British Empire Medal by King George VI on the occasion of the King's Birthday.