Ken Lobb served on HMS Gambia's 1955/56 Commission as a Lieutenant Commander (Lt. Cdr.). Ken passed away in 2014 aged 91 after retiring as Senior Captain ADC in the seventies.

Ken's son, Andrew, has very kindly sent some information about his life and some of the 100 or so letters he wrote home to his wife Vera. Andrew wrote that he was an academic really but very warm and loving towards Vera.

Born in Falmouth 1921, Cornwall, he grew up in South-East London and was educated principally at Eltham College (1933-40) He joined Standard Telephones and Cables initially at Woolwich as a telecommunications engineering student, later at Leicester (1941-2) Called up for the Navy, he was selected for technical training and later commissioned Temporary Sub-Lieutenant (Air) RNVR (1945), and Lieutenant RN (1946). Following qualifying courses, he held appointments on Flag Officer (Air's) staff and on the development and flight trials of the first fully stabilised Naval fixed-wing airborne radar.

Ken realised in the mid-fifties that in order to progress in rank he needed sea experience. He worked on radar during the last year of the war and was an electronics expert. Later, he was stationed in Lossiemouth with an interesting interlude involving the Torrey Canyon. He went on to be involved in the development of the Sea Lynx helicopter worked away from Portsmouth in London every week.vHe ended up as Deputy Principal at the Underwater Weapons Establishment on Portland working on torpedoes. The main man was a civil servant. He was consquently promoted Lieutenant Commander in 1954, his appointment included; HMS Gambia, in the Persian Gulf and Indian Ocean; development and trials of the all-weather Automatic Flight Control System for the Wessex helicopter. 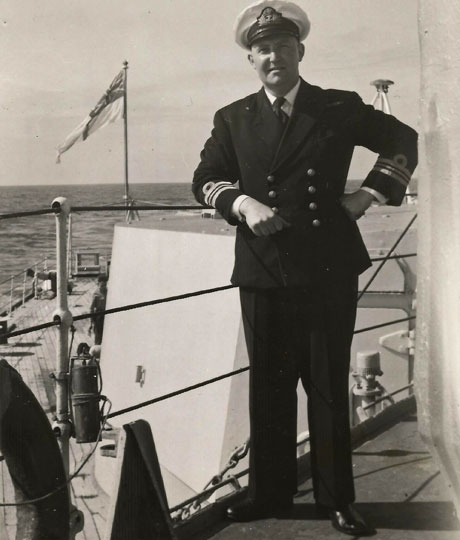 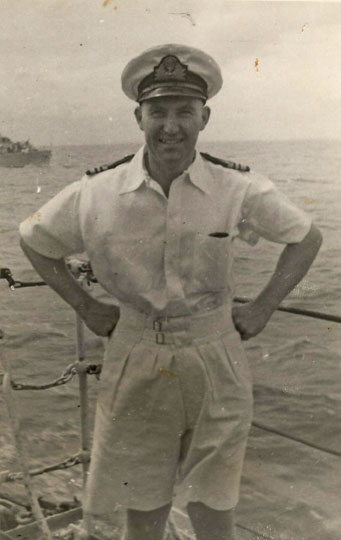 Promoted Commander in 1960, appointments followed to the RN Aircraft Repair Yard Fleetlands as Planning Manager; HMS Berwick as 21st Escort Squadron Weapons Engineer, initially in the Western Approaches, and then in the Far East during the Indonesian crisis; RN Air Station Lossiemouth as Head of the Air Engineering Department and for Modernisation Programme planning.

After a sabbatical year fossil hunting on the Dorset coast, he joined Sperry Gyroscope (UK) – later taken over by British Aerospace – to lead an Overall Ship Weapons Systems analysis team for the Acceptance Trials of the first fully automated Hunt Class Mine Hunter/Sweeper. This was followed by continuing development of Mine Warfare RN, and subsequently in NATO exercises.

He retired from British Aerospace in 1987, to live on Portland (with daily views of Lynx helicopters from the Naval Air Station below) to enjoy coastal and country dog-walking, membership of the local Rotary Club and support of various community activities.

"The letters are also written to be read in part to my elder nine year old sister. His Cornish sense of humour shows through. He would have had much in common with his father who was also in the Royal Navy in World War I."

The Torrey Canyon was wrecked on Pollard's Rock in the Seven Stones Reef near Lands End, Cornwall on March 18, 1967. As a "supertanker" carrying 120,000 gallons of oil she was the largest vessel ever to have wrecked at the time. It was an environmental nightmare with oil washing up on hundreds of miles of coastline along England, France and Spain. After several days, the ship broke apart into three sections and as all other efforts to contain the oil had failed it was decided to try and set fire to it. Planes of the Fleet Air Arm and Royal Air Force dropped a total of 161 bombs, 16 rockets, 1,500 tons of napalm and 44,500 litres (10,000 gallons or 12,000 U.S. gallons) of kerosene (jet fuel) were used.