"We've all got our own stories to tell. Some is unbelievable, most of it is the truth, but there's always a bit of embellishment along the line somewhere. If I might add, for any of us, in a position to do so, to jot down a few things what's happened." 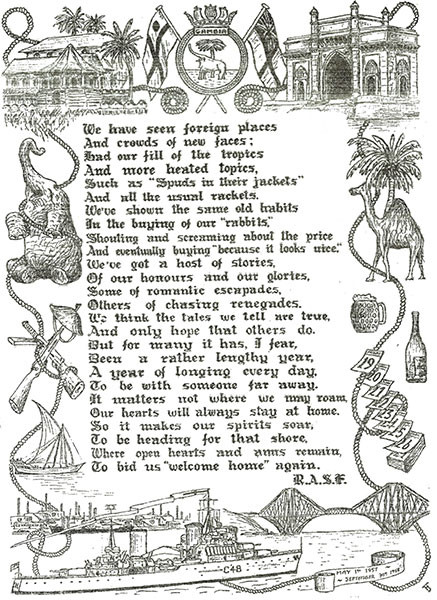 We have seen foreign places
And crowds of new faces;
Had our fill of the tropics
And more heated topics,
Such as "Spuds in their jackets"
And all the usual rackets.
We've shown the same old habits
In the buying of our "rabbits,"
Shouting and screaming about the price
And eventually buying "because it looks nice."
We've got a host of stories
Of our honours and our glories,
Some of romantic escapades,
Others of chasing renegades.
We think the tales we tell are true,
And only hope that others do.
But for many it has, I fear,
Been a rather lengthy year,
A year of longing every day,
To be with someone far away.
It matters not where we may roam,
Our hearts will always stay at home.
So it makes our spirits soar,
To be heading for that shore,
Where open hearts and arms remain,
To bid us "welcome home" again.

HMS Gambia was conceived during the re-armament period between 1934 and 1939. The Second London Naval Treaty of 1935/36 limited cruisers to 8,000 tons and in 1938 a new class of light cruiser, the Crown Colony class, was conceived for the 1938 Navy Estimates. The Crown Colony class design was based on the Town class of cruisers, using the same armament but differing in armour and dimensions.

Eleven ships were ordered of the Crown Colony class between 1937 and 1939. The first eight were the Fiji group which included HMS Gambia and the final three were the Ceylon group. Gambia was ordered on March 1, 1939.

Construction started on the ship on July 24, 1939, at Swan Hunter's Yard at Wallsend, Newcastle upon Tyne, and she was launched on November 30, 1940, by Lady Hilbery, wife of circuit judge Mr. Justice Hilbery. She was commissioned on February 21, 1942, and joined the British Eastern Fleet for active service based in Singapore.  In March 1942, the ship was adopted by the people of Huddersfield following a successful Warship Week National Savings campaign. She was involved in the Battle of Madagascar in September 1942 and later carried out trade protection duties in the Indian Ocean, and later still was carrying out anti-blockade runner patrols in the Bay of Biscay

Gambia was transferred to the Royal New Zealand Navy on September 22, 1943 and served with the British Pacific Fleet, participating in attacks on Japanese positions throughout the Pacific. In February 1944, she was searching for blockade runners in the Cocos Islands area. She also supported a series of carrier raids against oil installations and airfields. She saw action off Okinawa, Formosa and Japan and took part in the bombardment of the Japanese city of Kamaishi on 9 August. She was under attack by Japanese aircraft at the time that a ceasefire was announced, and possibly fired some of the last shots of World War II. She was in Tokyo Bay on September 2, 1945, for the signing of the Japanese Instrument of Surrender.

Gambia was returned to the Royal Navy on March 27, 1946, at Portsmouth. She underwent a refit and was recommissioned on July 1, 1946 for the 5th Cruiser Squadron with the Far East Fleet. She returned to the UK on 6 January 1948, and in January 1950 she was assigned to the 2nd Cruiser Squadron in the Mediterranean, later serving with the 1st Cruiser Squadron on the same station until October 1954. In 1953, she and her sister ship HMS Bermuda brought aid to the Greek island of Zakynthos when it was struck by a severe earthquake. On June 15, 1953 she was present at the Coronation Fleet Review to celebrate the Coronation of Queen Elizabeth II at Spithead.

In 1955, she became flagship of the 4th Cruiser Squadron on the East Indies Station. A decision not to refit the battleship HMS Vanguard, meant funds were available for a life extension and weapons upgrades of Gambia and Bermuda. In May 1957, Gambia sailed again for the Persian Gulf station, as the last flagship on this station, and returned to Rosyth on 19 September 1958. On 4 November 1958 she recommissioned for the 1st Cruiser Squadron in the Mediterranean. She deployed to the Far East on 4 December 1959 to relieve the cruiser Ceylon in the Red Sea.

HMS Gambia returned to the UK via South Africa with a visit to Freetown and the Gambia, before arriving in Portsmouth in July 1960. The last months of 1960 she served in the South Atlantic and the Home Fleet before entering the reserve in December of that year, her crew largely going to the new cruiser Blake. Gambia was paid off to reserve in December 1960 and she remained at Portsmouth until she was put on the disposal list and sold to Thomas W. Ward for scrapping. She was towed out of Portsmouth on December 2, 1968 and arrived at Inverkeithing for breaking up on December 5. She was finally broken up in 1969.

HMS Gambia was affectionately known as Fred by her crew.

and those are supposed to add up to 48 letters - the same as her pennant number, but it doesn't. There's 43 letters not including the spaces, or 51 if you include them; but who's counting?

This site was created because Bill Hartland's great original site about HMS Gambia that was active from 2003 disappeared in 2014. The remains of that can still be found on the Web Archive. In late 2016, I thought I'd try and resurrect the site. The Web Archive unfortunately did not archive many of the larger images but most of the text is still there and so this site is a mixture of Bill's original, pages from my own site which are about my own father's service on HMS Gambia, and new material I have been able to find.

Bill had a lot of material on his site but unfortunately the Web Archive was not able to collect all of it. We are hoping to make this site as comprehensive as we can, so if you have any material at all that can help, I really would appreciate it if you could contact me at brisray@yahoo.co.uk.

For his work on the original HMS Gambia Association website, Bill Hartland was made a lifetime member of the HMS Fiji Internet Association. In July 2017 I was given the same honour for my work on this one.

The site has been around for a few years now and here is a list of the dozen most recently updated pages: